Take your RPG anywhere with this pocket-sized Fantasy Role-playing Game by Brandon Goeringer. A rules-light game using only one D6. Easy task resolution and combat system allow for many fun-filled adventures for the whole family... or horde!

Pocket Fantasy is designed for ultra-fast fast hack-n-slash gameplay where the heroes may begin by encountering goblins and progress to fighting a dragon for its hoard of treasure, all in the same role-playing session.

A great way to just pick up and play!

This product is a zip file download including 3 separate PDFs which requires you to print out 4 double-sided pages (either 8.5 x 11 or A4 - both supplied) and fold, staple and cut to assemble your pocket sized booklet. Printing and assembly instructions are included in the zip file download.

If you have made a purchase of Pocket Fantasy RPG and wish to write a review, please log in and return to this product page. 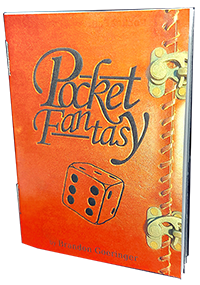