The North Road has been long and treacherous. Finally the party reach their destination and seek and audience with the Queen. However, the enemy has other plans for them.

This module simulates a huge battle in a castle fortress against a myriad of difficult enemies.

This system neutral module can be played in almost any tabletop role-playing game, either as a one shot, or as part of the North Road campaign. Decisions regarding difficulty, stats, NPC power and rewards are placed in the hands of the game master. The story-by-event structure is simple to follow and there is plenty of flavour to help you enrich the gaming experience.

The 8.35Mb PDF is 13 pages (including the cover). It contains black and white and full colour images, but is reasonably printer friendly.

Warning: This work contains graphic and/or extremely violent scenes. Some content is also sexually suggestive. The content is not intended for children and should be considered adult in nature. It may contain horror, torture, violence, murder, death, conflict, psychologically disturbing, sexually suggestive and other adult themes. Discretion is advised

If you have made a purchase of The North Road - 12 White Castle and wish to write a review, please log in and return to this product page.

Price: USD $6.99
QGADV012
The 8.35Mb PDF is 13 pages (including the cover). It contains black and white and full colour images, but is reasonably printer friendly.
Add to Cart 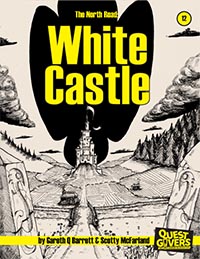