From ancient times the tribes of humanity descended into this holiest of mountain shrines worshipping the gods of their ages. Shrine was built upon shrine and the ancient gods of old stacked upon each other. A cataclysm has shattered the vaults and mixed centuries of gods from the most primal to the more abstract and now the legacy and treasures lie in a ruined dangerous state. Can the party traverse this devastated and magically polluted subscape.

The party need to find their way out of a chaotic mix of magic and divine power.

This system neutral module can be played in almost any tabletop role-playing game, either as a one shot, or as part of the North Road campaign. Decisions regarding difficulty, stats, NPC power and rewards are placed in the hands of the game master. The story-by-event structure is simple to follow and there is plenty of flavour to help you enrich the gaming experience.

The 8.76Mb PDF is 15 pages (including the cover). It contains black and white and full colour images, but is reasonably printer friendly.

Warning: This work contains graphic and/or extremely violent scenes. Some content is also sexually suggestive. The content is not intended for children and should be considered adult in nature. It may contain horror, torture, violence, murder, death, conflict, psychologically disturbing, sexually suggestive and other adult themes. Discretion is advised

If you have made a purchase of The North Road - 09 Inner Sanctum and wish to write a review, please log in and return to this product page.

Price: USD $6.99
QGADV009
The 8.76Mb PDF is 15 pages (including the cover). It contains black and white and full colour images, but is reasonably printer friendly.
Add to Cart 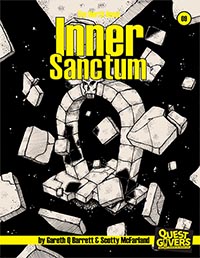