Victor Frankenstein's fiancé is worried about him. Something is not right. A creature haunts the city amidst a cholera plague and bodies going missing.

Ingolstadt, Bavaria - 1799 Elizabeth Lavenza is searching for her fiancé Victor Frankstein. Cholera has taken the lives of many citizens of the city and the streets are crammed with fear. Amidst the chaos, bodies of victims are going missing and a creature stalks the rooftops near Victor's laboratory.

This is the second adventure module collaboration with Professor Dungeon Master of the DungeonCraft YouTube channel following the his first module "MacDeath".

Dripping with death and bodies this grizzly adventure adapts the classic novel Frankenstein (or The Modern Prmoetheus) by Mary Shelley as only Daniel Defazio can.

Frankenstein will fit right in with your fantasy, medieval or Victorian role-playing game. Great for fans of role-playing and drama, this one session module works as a single evening's entertainment or a convention game.

The 3.9Mb PDF is 20 pages (including the cover). It contains full colour images and will consume printer ink.

5 Stars - Kevin Kelleher - [2021-11-24]
I'm happy to report that this one-shot went exactly as advertised! My players had a blast and it could not be easier to run from a GM's perspective. Highly recommend!

5 Stars - Brett - [2021-11-08]
Just ran this adventure for my 4th level AD&D group tonight. They had alot of fun. Best part was they had over a hour long moral debate. This was very well made. I didn't have to prepare anything other than I read it twice and really could have gotten away with a one time read that's how well it was put together. Almost every possible thing was thought of and had a answer or outcome for. My group finished it in about 3.5 hours. That's perfect for a one night game. This is by far the easiest adventure I ever ran. its just perfectly made.

5 Stars - Will Severin - [2021-10-23]
Wow, just amazing. I ran this for my usual group of murder hobos and they loved it. They managed to not get into a single fight and just roleplayed their hearts out for 4 hours straight. Afterward they all just said, "Oh my God, I want to go read the book now..." The module does a great job at getting the players invested in the story like I've never seen before. I really enjoyed running this, it was super easy to understand and the story flowed naturally while we played. I recommend getting some nice ambient horror music with organ and synth and throw in a few lightning bolt and wilhelm scream sound effects for good measure.

If you have made a purchase of Professor Dungeon Master's Frankenstein and wish to write a review, please log in and return to this product page. 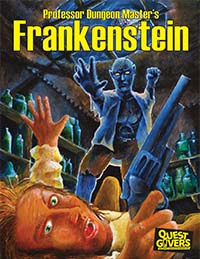