The North Road is a complete fantasy adventure story across 16 modules, 12 interconnected system-neutral modules and 4 add on quick quests. A whole campaign in a living breathing world with history, secrets, unique monsters and memorable NPCs.

A great campaign to run with your choice of fantasy tabletop role-playing game. Adventures that entertain your RPG group, hook them with an interesting story, great characters, fearsome monsters and memorable encounters. The campaign fits with your style of gaming, your group’s current levels and the rule system you are playing.

The North Road is heavily story focused and divorces itself from the mechanics of a specific system. Run it how you want, where you want and in whatever system you want.

The North Road doesn’t provide any stats, only flavor and abilities are suggested for monsters and NPCs. This frees you up to use stats for whatever level your characters are or system you are using.

You can actually run the campaign straight out of the book.

When you read the North Road as a game master, you begin to experience the modules as the players will. You get to see all aspects of the larger story unfold and learn as you read.

The North Road provides lots of NPC dialogue options, even the words to speak and the translations of foreign languages, you can use to add more flavor to your game.

The North Road does provide unique monsters, but our approach is to reuse monsters in different ways to build continuity and variation in threat.

You will find enough detail and depth to the setting to get the players to truly invest in your game and return for the next session. The culture of the game world, while different from most, will not be completely alien to most home brew worlds, or settings of major game systems. You will be able to easily insert this realm as another area of your world as if it had always been there. Interesting political structures, strange cultural differences and a different approach to a society that will give the players the sense that they truly are in a foreign land.

Each of the 16 modules is designed to be a different gaming experience for the players. Helping to motivate them to continue playing through to the end. The shifts in pace and style mean that each module can actually be run independently of the others.

Death and Taxes - A seaside village in the grips of over taxation and a devastating narcotic problem welcomes the party. The tax collector is on her way and the local tavern-keep is plotting to make some changes.

The Arcane Vault (Quick Quest) - Deep beneath a temple crypt something 'magical' is happening. Missing towns people, a ghost and a cranky meat blob.

The Loyalists - The party are on the run with a 'charming' companion. They are being pursued towards a nearby town. Little do they know, they are about to become embroiled in a local political mess. Which faction is telling the truth, which one is lying?

Blood Moon Temple (Quick Quest) - In the caves below town, a librarian is up to no good. Dark rituals, strange creatures, and dead dogs.

Messenger In The Woods - Escaping into the woods around the town, the party begin to wander the vast forest in search of a campsite. Pursued by dark and evil forces, they have until the end of the day or else something horrible is going to happen. The characters need to use their skills, wits and cunning to stay ahead, alive and true to their convictions as they run out of time and get deeper into the strange domain of the trees.

Belly of the Beast (Quick Quest) - Falling through a hole in the underbrush, the party land in a weird underground lake. Something lurks. Is it friend or foe?

Knights of Old - The party search for an honour guard as they begin to piece together what is happening in the realm. They will discover many challenges when they enter a carnival behind a strange magical barrier. One amongst them is not what they seem.

Death Becomes You (Quick Quest) - There is always one more challenge, but is this one the deadliest of them all?

Dark City - The party arrive at a city under the control of an oppressive regime. Roaming gangs control the boroughs of the city. Harsh laws and edicts sentence people to death for minor transgressions. The party will need to make their way through the city in order to proceed along the North Road.

Mountain Clan - The party escape the city, leaving the North Road in search of relics. Their only lead a map torn from an old book. The way ahead is filled with danger. Numerous deadly encounters, saboteurs and several vicious traps. Meet the Mountain Clan, encounter creatures mentioned in old libraries and the Death Guard!

Thief - The party enter a small mountain-top hamlet where they find that a religious leader has been murdered. They have to contend with incompetent law enforcement, bickering townspeople, infighting, infidelity, and a dog that seems to know a lot more than he can say. A who-dunnit module designed specifically for a role-playing and character interaction. Perfect for a session of sleuthing without having to kill anything (unless you want to!).

Temple in The Mountains - Pursuing a nefarious character over the mountain passes the party arrive at a huge fortress overrun by dark forces, the Temple in the Mountains. They will have to infiltrate, investigate and exterminate without the Princess discovering them.

Inner Sanctum - A dark ritual. A lost cave. Blind Dreks. Finding their way to safety with their captive alive will be a challenge bards will sing about.

On The Run - A race against time, pursued by evil, the party must try to stay ahead of a horde of angry acolytes. The road is difficult and the cart is rickety.

Grip of Evil - Demonic powers plague the party in the final leg of their journey. Emotional fortitude and a strength of will may help them overcome severe adversity, or it may not.

White Castle - Seeking an audience with the monarch of the realm may not be as easy as they thought. Decisions will need to be made. Alliances tested. Truths told. In the end, there may be only one.

Warning: This work contains graphic and/or violent scenes. The content is not intended for children and should be considered adult in nature. It may contain horror, torture, violence, murder, death, conflict, psychologically disturbing, sexually suggestive and other adult themes. Discretion is advised.

5 Stars - Jonathan Himes - [2022-02-01]
This lavishly illustrated set of RPG modules offers an innovative, intuitive approach for Game Masters to run lots and lots of gorgeous gaming sessions! The Events orientation (rather than static locations of some traditional TSR modules, where NPCs feel stuck in limbo) gives a welcome CYOA vibe as game masters read the materials to prep. The vintage style of the illustrations help to convey a fleshed-out world that serves tremendously for GMs as a model on how to run not only this book, but how to conceive of future adventures of their own design. For instance, the first module, "Death and Taxes," really gets you thinking about what has brought PCs together in a coastal town, and the module uses NPCs to masterful advantage in helping players navigate their way to key locations as they uncover the local ecology and the economy of the region. This Dialogue- and Events-driven approach really helps convey a sense of flavor and realism to the town, as you hear about it through well chosen NPCs, who represent various walks of life that weave into the unfolding plot. It's truly open-ended (sandboxy), though PCs will naturally want to follow the leads given through the strategic and entertaining dialogue boxes (samples are liberally strewn, and rumors randomly generated). There is lots of humor and intrigue, and the variety of different adventure types, from dungeon crawls to madcap chase scenes, shows great innovation and is a well of great ideas that can inspire GMs to broaden their repertoire of gaming experiences at the table. Without the authors (DMG and DM Scotty) having to dictate a linear path, but rather by colorfully portraying the area and its curious inhabitants, the modules offer a coherent story that DMs will enjoy discovering themselves on their first read-through, almost as if reading an 80s gamebook. This makes game prep a real joy rather than a chore. Also, the photos of highly detailed and exceptional terrain & miniatures give inspiration on setpieces or scatter terrain to put on your table. All in all, there is enough material here to keep any gaming group fully occupied and inspired for a long time. It is definitely a campaign book that is worth your money. This book is a masterpiece not only of "dungeon" design and world-building, but of document design and artistic rendering by two geniuses of the RPG community.

If you have made a purchase of The North Road Book & PDF and wish to write a review, please log in and return to this product page. 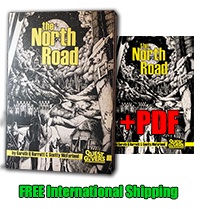