Finding a campaign to run for your fantasy tabletop role-playing game is sometimes hit and miss. You want a campaign that will entertain your RPG group, that will hook them with an interesting story, great characters and memorable encounters. You don’t mind doing prep, but you really don’t want to have to rewrite the whole thing to fit with your style of gaming, your group’s current levels, the rule system you are playing, or because you always have had to do that with previous modules.

Getting your players to engage beyond a single quest and to build a campaign they will want to keep returning to play is important. However, you don’t want everything to be prescriptive and you still want to be able to add your own flavour and make it your own.

You don’t want to have to drop all aspects of your homebrew world, or your house rules that have taken so long for everyone to agree upon and get used to. You also don’t want to spend hours having to bend a module to fit what you have already achieved, or to have characters start again from level 1, or whatever level the module prescribes.

If you are new to being a game master or dungeon master for your group, adventure modules can be quite complicated beasts to wrestle with. This makes it difficult to actually learn the skills required to be a good game master and to begin to create your own successful campaigns. You just want something you can actually run straight out of the book.

We at Quest Givers found that traditional campaigns for tabletop role-playing games tend to lack certain important components. Components that lead to frustration and having to take the adventures apart and put them back together again so that it works for your group. For beginner game masters this becomes quite a daunting task as you don’t really know how to do this and the game rulebooks give little in the way of instruction on how to actually structure a story or how to flow from scene to scene.

The first thing we found lacking was a consistent structure to the story, an easy to grasp and simple to relay structure to build interest and continuity with the players. We also found most modules don’t really give you an idea of how to portray NPCs. There is no dialogue to help you figure out how they should speak, how they carry themselves in the environment of the story and how they react to player input.

Adventures usually tend to be built around a monster encounter and the game world lacks depth and continuity, leading to player disinterest and murder-hoboism. We don’t like being lured into a purchase that lacks substance, ending in a pile of RPG books that are only ever good for picking a handful of ideas out of. Death & Taxes gives you, the game master, a wonderful starting point to a 12 episode campaign. You will find enough detail and depth to the setting to get the players to truly invest in your game and return for the next session. The group begins in a seaside fishing village that is under the burden of over taxation.

The North Road is system neutral, so you are free to use any system that embraces a fantasy genre. The adventure will work for characters of different levels, so you can include it into your game at any point. We introduce monsters that are not in any monster manual, but you will enjoy creating your own stats for it to be just right for your players. We only give the flavour and style of the monsters; you get to do the juicy bits.

The culture of the game world, while different from most, will not be completely alien to most homebrew worlds, or settings of major game systems. You will be able to easily insert this realm as another area of your world as if it had always been there. Interesting political structures, strange cultural differences and a different approach to a society that will give the players the sense that they truly are in a foreign land.

Characters and monsters are loosely described so you are able to flesh them out with your own details, change the level of severity as you see fit, but maintain the flavour of the character and its role in the story. The story provides detailed responses to character questions and plenty of rumours and utterances by the local populous to build a background to events.

The story unfolds as you read it through the first time, so you get an idea of what the players will experience when they play. The module is written in a style reminiscent of the old “choose your own adventure” book series. The narrative is event-driven, so you can easily allow the players to find their own path and then use the next event to propel the story forward. Learn a little of the history of the place in books that detail more about the realm the characters find themselves in.

Any purchase you make on this website helps to support the future production of content. We are grateful for your support and want to continue to give back to you the kind of adventures you want to run for your group. New modules, more videos and RPG tools for you to use in your games.

The North Road is the debut campaign series of adventures from Quest Givers, the collaborative effort of DM Scotty (Scotty McFarland from theDMsCraft) and TheDMG (Gareth Q Barrett from theDMGinfo).

The 136Mb PDF is 425 pages (including the cover). It contains full colour images, and will use a considerable amount of ink.

Warning: This work contains graphic and/or extremely violent scenes. The content is not intended for children and should be considered adult in nature. It may contain horror, torture, violence, murder, death, conflict, psychologically disturbing and other adult themes. Discretion is advised

If you have made a purchase of The North Road (PDF) and wish to write a review, please log in and return to this product page.

Price: USD $49.99
QGCAMP001
The 136Mb PDF is 425 pages (including the cover). It contains full colour images, and will use a considerable amount of ink.
Add to Cart 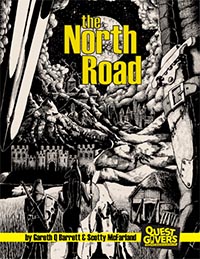